I developed a comments feature for KenHaggerty.Com over three years ago, right after I had successfully published the first couple of articles. I implemented a required displayed name property for users and a related user image entity. The displayed name and user image were used when posting a comment. I developed a moderated workflow for comment submission by the user to admin publication. A topics feature which implemented comments became comments for projects. When I started to migrate comments from topics to projects, I realized I had too much code in too many places.

I usually make big changes when I refactor a feature, I try to apply new knowledge and lessons learned. I wanted the new comments feature to be easy to implement for multiple entity types. I cloned the UWD2FAP to the new ASP.NET Core 6.0 - Users With Comments Project (UWCP) and added a few mock entities to test and demonstrate portability. The article series describes the implementation of the new comments feature.

I didn't want comments to delay loading the entity content. I developed Comments, MemberProfile, and ProfileImage ApiControllers which allow loading comments from JavaScript after the page is loaded. This article describes implementing API support for an existing razor pages project.

I wanted to encourage users to use a profile image. I had already implemented Croppie to crop and resize a file image before it is uploaded and stored as a Data URL. I developed a ProfileImage API and a new Profile Image Control which adds options to use a webcam snapshot, or a stock image stored on the server.

I implemented lazy loading for long lists of comments and members. When a comment hash is set, the list is incrementally fetched until the hashed comment is found. I added a comments option to the Seeded Users feature to develop and test long lists.

As I refactored the comments feature, I often asked myself, why did I do it that way. Most times I clarified the code. Sometimes I spent hours remembering why. I always end up learning a few new things.

Successfully completed. Thank you for contributing.

You will be emailed when approved. 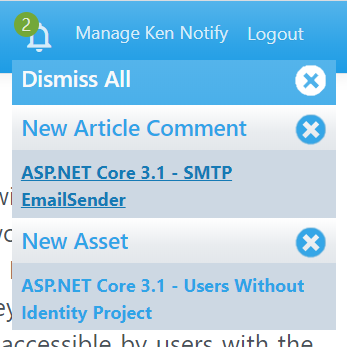 You appear to be away and will be logged out.

Touch the screen, move the mouse, or press a key to continue without logging out.